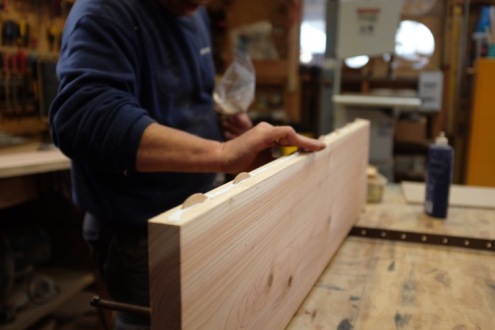 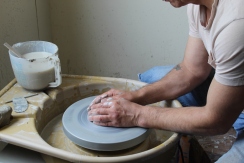 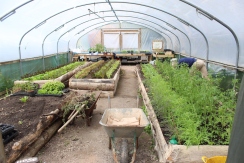 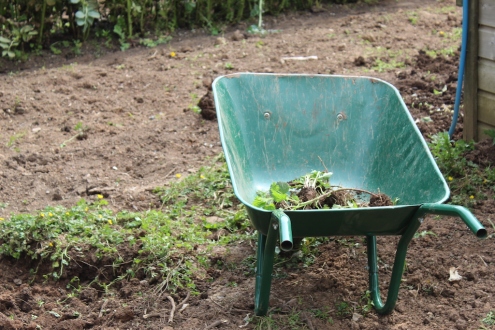 “Since being here I’ve been working on the veg patch, harvesting veg, which is pretty cool and interesting. I’ve learnt quite a few things … harvesting different things … like kale and stuff, knowing where to cut it. I’ve never done that before. What else? I’ve done a bit of woodwork helping Graham make benches. Just a whole variety of things really. I kind of enjoy everything and luckily, I get moved around, so I get to do a bit of everything. Pottery is good as well, but I’m not very good at it. I’ve watched the pottery programme on tv, and they make it look so easy. I just enjoy everything I do.

One of the best things about being here is the atmosphere. The people that come in. Everyone gets on and it’s a really nice place to be really. You’ve got a great support network. Chris is just 100% genuine and caring for people and wanting them to progress and do the best they can for themselves. That’s hard to find … someone like that. We’re lucky to have Chris in our lives.

Every day up here is a highlight. Just coming in … just being here. That is the highlight.

Before LandWorks I was homeless and I would just sit down on Torquay harbour, smoke weed, get drunk and that was it. I wasn’t doing anything. I was just stuck in the moment and I’d probably still be there. I was trying to get help before, but I couldn’t get anywhere. It took getting into trouble to actually be able to get some help. The system’s just back to front. You’re not on the radar as such. It’s pretty sad that you’ve got to get into trouble, but it is what it is.

Am I a positive person? If you had asked me that four months ago, I’d have said ‘no’, but with counselling and everything with Becca [LandWorks Counsellor], which has been brilliant, I’m just trying to let a lot of stuff go. Be positive. I can’t change my past, but I can change the future. It’s just working towards staying positive. Even when things are not going my way, I don’t really let it get me down. It’s really good. I’ve tried counselling before, but it just didn’t work. I went in once and that was it, it kind of put me off. Chris, obviously, said about Becca, and yeah, she’s been great. [The past] There’s nothing you can change. It’s done. You need to let it go. Not everyone can do it. In a way, the way I was brought up, in care and everything, being able to let go of everything is quite easy. You need to adjust. From a young age I learnt to detach my emotions. It’s been interesting.

The most helpful thing is just the support from all of the staff here. Sue’s been good. Becca’s been good. Chris is good. When they all give you that support … I don’t know … it covers a lot of bases. All of the support you get is priceless. I wouldn’t get that anywhere else … not at all. I’ve gone from being homeless and being in trouble to being here every day. I’m not drinking that much anymore. I’m not smoking cannabis anymore. I’m a lot more focused and a lot more positive. My housing issues are starting to change. It’s all good things.

I’m quite a quiet person. I’m more of a listener than a talker. [Becca helped] Yeah, that’s why I’m quite happy to sit and talk now. It’s about not just being a listener. It’s learning the skill of being able to talk. That’s a pretty good thing to be able to do. When you’re homeless you don’t really talk to a lot of people. It’s quite easy just to lose that. When you’re on your own most of the time, you don’t really tend to talk. If you do, you’d probably get the men in white coats coming to get you. Sometimes I didn’t talk for weeks at a time. Near the end of being on the streets, I did use to sit on the harbour, and I did force myself to just say ‘hello’ to people as they walked past. A lot of people did say ‘hello’ back and they might stop and have a little chat. There are ways around it. There are kind people out there, people that do genuinely care, like Chris and most of the staff here do. That’s why it’s such a good place to be.

I’m learning life skills […] My confidence is just so much higher. You know that’s because of coming in and being around the staff and Chris. They kind of instill that confidence in you. They have belief in you and when you’ve not really had that, that’s a big difference. It gives you a boost.

The fact that people come back to stick their head in and say ‘hello’, that speaks more than words. That’s real respect and love for the place. […] I think the more you come in, you spend more and more time around positive people, it just gradually gives you that lift. Now when I go out, that goes with me as well. I try and instill that into other people as well…”

One thought on “Robin says: “It took getting into trouble to really get some help””